They gathered on the horizon like a black plague. Leprous. The end of all good in this world. The buildings had turned to dust. The stars burned out. I shivered. I lit a small fire and checked the shotgun. I had five shells in and nine extra. If they came again, I’d have to be careful. This would probably be it. The last attack had been brutal. They fell back and watched as I hacked one to pieces with a shovel, lit his head on fire and stuck it on a stick as a warning. I shrieked at the godless sky in primitive fury. I don’t think they liked that too much but I didn’t really care what they thought.  They pushed and now I was pushing back. I pitied them. Outside the house,  I could hear them gathering…  grunting, shouts, screams of the dying. Those that have escaped told stories of mind-bending horror. “They were peeling the skin off…”  I stopped such thoughts and prepared myself. I took my long Gerber Mark II knife and slit my forearm lengthwise. Rivulets of blood ran onto the floor. I was surprised at the color. In the dim light it was black. “Well, one of my past lovers had called me a black-hearted bastard… I guess she was right.” I mumbled to myself and chuckled. Taking two fingers, I smeared blood across my cheeks and face. I put on my war paint as it was time to take a stand. Picking up the shotgun, I heard the rush of approaching feet as the door burst inward in a shower of wood and violence…

I woke up with a start…  my phone was buzzing. A truck rumbled through the intersection outside. Clawing at my phone, silence soon reigned again at Ridiculous. I peered at the time. 5:53 am. I pulled myself from the bed and made coffee. I shook my head to clear away the remnants of a nightmare world. What dreams I sometimes have! I mumbled and stretched as I looked at the pool in the backyard. Pool pals were coming to visit. Devin Scott, Theo Van Bruggen, Grant, Jen, Josh Nelson, Brandon, MRZ, Chelsea and Al would be over at around nine am. Ridiculous resident and all around ruler-  Bunk- was getting up and ready as well. I drank coffee and listened to Massive Attack – Angel…  memories of apocalyptic battle faded with the growing dawn. 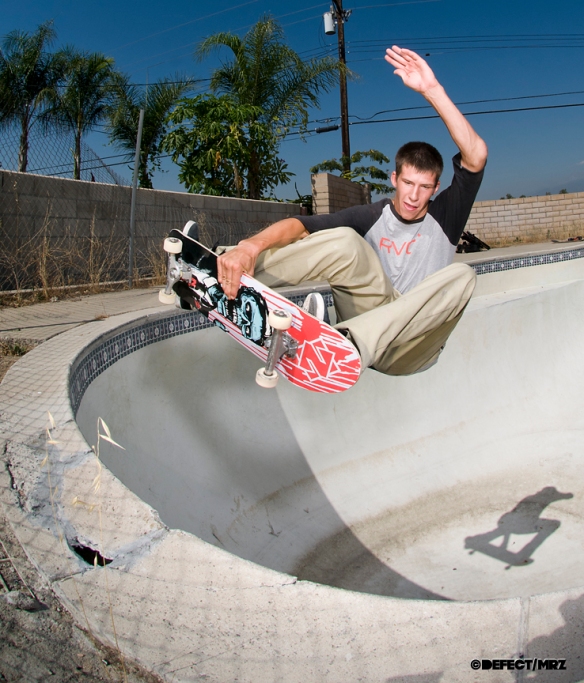 The crew arrived and everyone was really stoked to be going out and skating. We wanted to get an early start as the temperature was already in the nineties. By noon it was going to be a brain burner. We loaded up and headed out. First pool. Fire pool. Everyone jumped in and swept and cleaned. The girls surprised everyone and quickly put lines down. Chelsea pulled her first grinds in a backyard pool. Devin, Theo and Grant threw down light box and Al hammered disasters and other insanity. Josh Nelson pulled rock-n-rolls and Bunk crushed light box. MRZ took some amazing photographs but the heat was already beginning to take its toll. 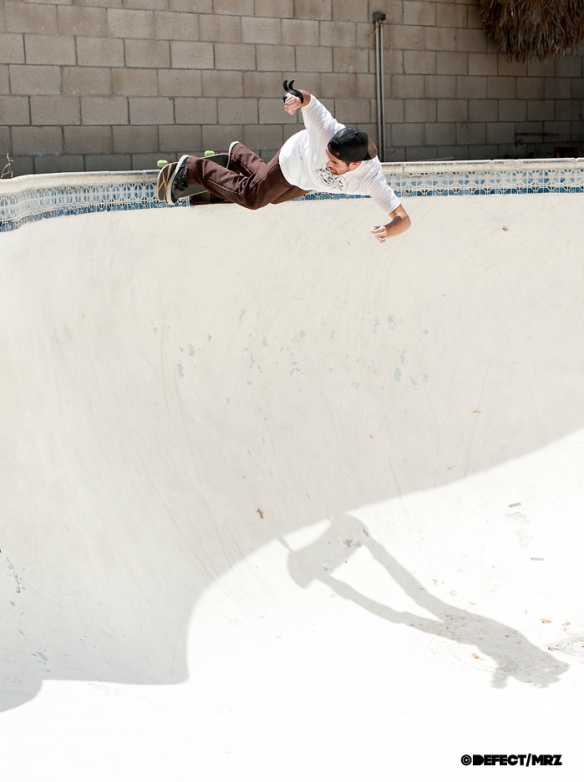 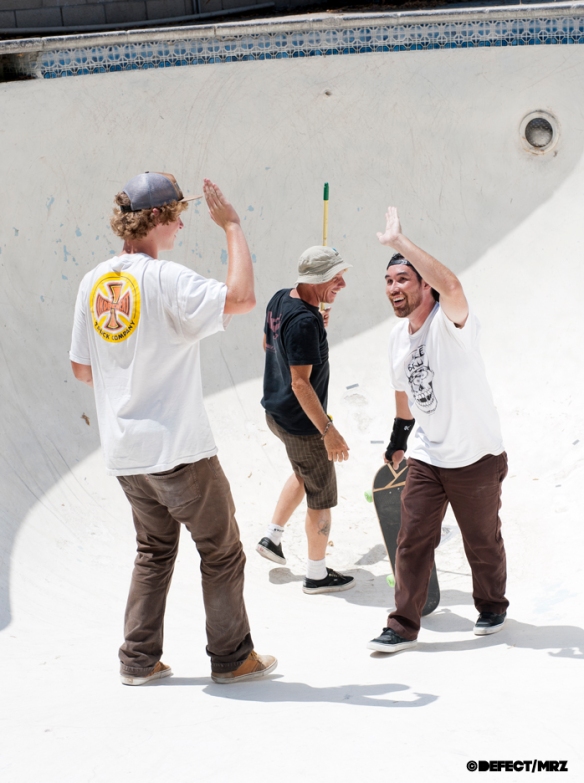 Theo giving up some High Fivage

We headed out and stopped for refreshments. Cool beverages. Life. The next pool was going to be the Triple Bubble. Theo had been wanting to get into the Bubble since he saw us drain it last summer on the BTO. It was his turn and after a sweep and a quick cleaning, he didn’t disappoint. Side cup grinds, deathbox lappers and all around ripping were put in under the heat. The Triple Bubble has a big tree that provides welcome shade and we were all posted up trying to take advantage of this fact. Brandon Wong decided that he wasn’t going to stay on his BS deathbox attempt. The promise of a “High Five Parade” from everyone changed his mind. Minutes later, that ghost was slaughtered. Good stuff! Regardless, the heat was intense and after everyone had a good session, we headed out again…  San Burn Gnar Dino. It lived up to its name.

Josh Nelson wasn’t playing around at all… BS Ollie

friends- hold on to what you’ve got… it could be much worse.

I had to leave and deal with some things but Bunk took the crew over to a nearby pool for a ten minute quickie but by then, the heat had really become unbearable. The entire day made me think of a few things. My dream had been fresh in my mind. It was of a bleak world. A world of no happiness, no love, no friends… only despair and violence. I have been around the world. I have seen things. People live in a violent world right now! War. Conflict. Catastrophe. It made me think that we might want to hold on to what we have. What we have is far better than what is brooding on the horizon. Fini. Thanks to the crew and to MRZ for the images. Skate- Ozzie

3 thoughts on “hold on to what you’ve got”